What, who, where and why is she all about? She is 19 years old, British Cam Girl Carmina is her name and getting you off is her game. She might be one of the sexiest chicks we have here at our harem of stunning babes. She has that face that can melt you in seconds. So off the wall, she will make you fall in love with her in a matter of milliseconds. She is a type of a chick who loves to be complimented every step of the way and all those tokens you have, be sure to share it with her as she sure does deserve it. Bisexual, British hottie with B sized boobs that love being fondled, and an athletic build that you have seen only in movies. END_OF_DOCUMENT_TOKEN_TO_BE_REPLACED

With the speed of the internet these days girls can set up a webcam any where and have fun and that’s exactly what this pretty red head from Sunderland did. She took her laptop to a quite field somewhere in the country, switched it on and let all her viewers watch as she removed her white knickers hitched up her short dress and exposed her sweet shaved pussy live on cam. I was transfixed on this SugarGirl for hours, she is so beautiful and though she was flashing her pussy outdoors and exposing herself in public it just seemed so natural, her pussy and asshole was so sexy I could of feasted on both for a month and still not be satisfied. 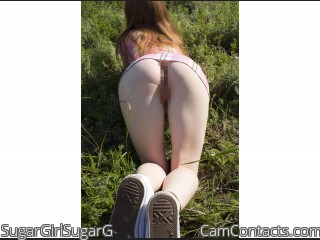 As time went on I could see how turned-on she was getting, her pussy becoming more moist and then wet, you could hear it squelch as her fingers slipped in and out. It got to the point where she couldn’t keep her fingers out of her wet hole and she was gyrating more and more. It was one of the best cam shows I’ve ever seen, watching a stunning red head finger herself in an open field on a hot summers day. You could see her white cream start to build on her fingers and the pale skin of her pussy, her feet tensing, toes curling, she was so sexy and so up for it. I swear if someone walked by she would of let them fuck her she was so hungry for cock.